You don't have any saved vehicles!

Look for this link on your favorites:

Once you've saved some vehicles, you can view them here at any time.

CALL US FIND US
Call Sales
Call Service
You Are Here: Home > The Sweet Spot in SUV’s – 2018 Chevy Equinox

The 2018 Chevy Equinox is a significant upgrade over the previous year’s model, particularly in the ride, noise reduction, and interior room. There are more safety features and driver assistance technology included as standard. It is again offered in four models: entry-level Equinox L, LS, LT, and Premier.

There are three new drivetrains on offer, most notable among them being the new one and a half liter turbocharged four that is the base engine. The base engine is one of the best engines in this segment of the marketplace, returning 170 hp and 203 lb-ft of torque. Coupled to a six-speed automatic gearbox that sends the power to either the front or all four wheels.

On the road, the driving performance of the 1.5-liter engine remained impressively smooth and stable when pushed.

At first glance, it looks like the 2018 Chevy Equinox has been visiting the gym. The hood is more muscular now as is the front facade. The robust hood makes more room for an upper grille which merges into the cooling grille that now features a broader frame and sizeable rectangular mesh. The lower part of the front now butts up to the bottom of the grill. The fog lamps have a more recessed look which adds more appeal to the front. The headlights have been made slimmer to bring them to a sharper point at the grille and also at the fenders.

Down each side, there is a small relief line that follows the wheel arches. That same body line that corresponds to the axis of the door handle repeats in the relief line just above the lower cladding. The side mirrors have a thinner, more aggressive look, while the fixed glass in the rear door receives a modern, more definite look.

At the rear of the new 2018 Chevy Equinox, there have been some changes. The most obvious thing being that the roof is now sloped down by a few degrees. No pillars are separating the rear quarter glass and the glass of the hatch. Rather, the two panels of glass almost meet up with the rear door having their sides combined into the rear projection. The taillights are much smaller now and are a two-piece unit. 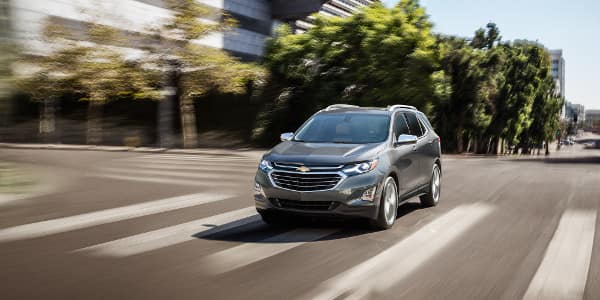 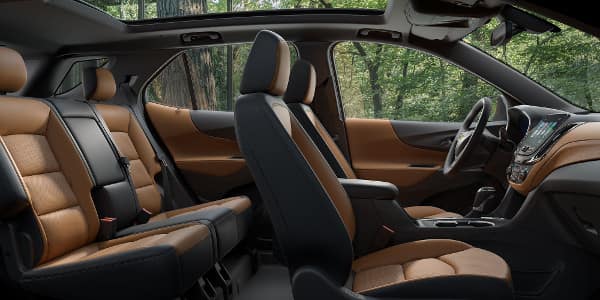 While the exterior has some significant changes, the inside has some good upgrades as well. The dash is not as over-styled as previous years. It has the same general look, but now revamped and bigger than before, this has worked in the 2018 Chevy Equinox’s favor as it does away with the rough plastic Equinox interior of years-gone-by. Plastic is still evident, but there’s a definite move toward softer touch and lower impact materials. The center area has been modified and is now shorter than previous models. A MyLink infotainment system is available on all the models with two screen sizes, 7 inches and 8 inches, and now protrudes slightly from the center of the dash. Apple CarPlay and Android auto connectivity included in both MyLink systems.

The center console has a recognizable look, the shifter on the left and two cup holders on the right. The front storage compartment area near the gear shifter is slightly shorter and broader than previous models.

The interior is available with various upholstery choices, including a denim-style seat fabric. In front, the seat quality is mainly dependent on the upholstery. The fabric seats feel considerably snugger and more comfortable on longer journeys. In the backseat, there is sufficient leg and headroom and plenty of space for three adult passengers.

Interior cargo room space remains nearly the same as previous models, even with the smaller exterior dimensions, with 63.5 cubic feet when the rear seats are folded down. Rear passengers’ seats have lost the ability to slide forward and backward but now are reclinable. The 2018 Chevy Equinox also has a rear seat that is used for “kneeling”.

Remarkable standard features and an intuitive information and entertainment system all help lift the 2018 Chevy Equinox which include but not limited to Apple CarPlay and Android Auto connectivity as well as 7.0″ MyLink system. But there are more features to include in this list such as Teen Driver technology, steering wheel audio controls, 4G Internet LTE wi-fi, keyless start, 17″ wheels, cruise control and ANC. Parents can program the 2018 Chevy Equinox to limit maximum speed and stop deactivation of safety technology, while also getting a report on the driver’s conduct. 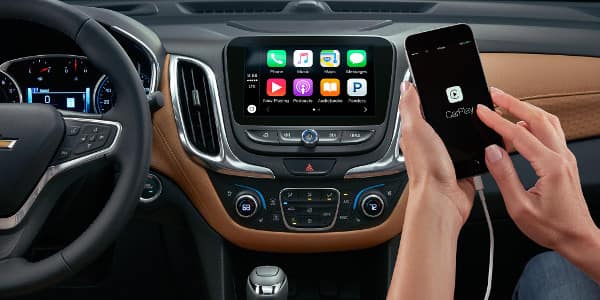 Why should you buy from us? Our unmatched customer service and vast Chevrolet inventory have set us apart as the preferred dealer of Chevrolet vehicles. Drop in today to see why we have the best reputation in the Maywood, IL area.

Our sales department’s purpose is to surpass your expectations from your first test drive to the delivery of your new vehicle. Our dedicated, enthusiastic sales team will provide you with the best possible experience when purchasing your new 2018 Chevy Equinox. Our objective is for you to feel that the car that you drive away is your perfect vehicle. Our technically advanced service department uses the latest repair and diagnostic equipment and our experienced highly-trained technicians can guarantee effective service to ensure the long life of your new purchase.

You don't have any saved vehicles!

Look for this link on your favorites:

Once you've saved some vehicles, you can view them here at any time.